This annual award is chosen by the Literary Awards Committee of the Wisconsin Library Association (WLA). The Award is given for the highest literary achievement by a Wisconsin author for a book published in the previous year. The work must be written by a person who was born in Wisconsin, or is currently living in Wisconsin, or lived in Wisconsin for a significant length of time. 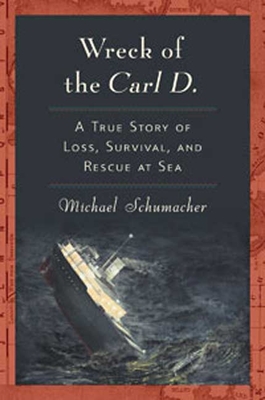 From the Publisher: By the author of Mighty Fitz, the dramatic account of the sinking of the Carl D Bradley on Lake Michigan, published on the fiftieth anniversary of the wreck. At approximately 5:30 PM on November 18, 1958, the Carl D Bradley, a 623-foot limestone carrier caught in one of the most violent storms in Lake Michigan history, snapped in two and sank within minutes. Four of the thirty-five man crew escaped to a small raft, where they hung on in total darkness, braving massive waves and frigid temperatures. As the storm raged on, a search-and-rescue mission hunted for survivors, while the frantic citizens of nearby Rogers City, the tiny Michigan hometown to twenty-six members of the Bradley crew, anxiously awaited word of their loved ones' fates. In Wreck of the Carl D, Michael Schumacher reconstructs, in dramatic detail, the tragic accident, the perilous search-and-rescue mission, and the chilling aftermath for the small town so intimately affected by the tragedy.