First presented in 1967 and customarily announced in June, the Boston Globe–Horn Book Awards are among the most prestigious honors in the field of children’s and young adult literature.

Winners are selected in three categories: Picture Book, Fiction and Poetry, and Nonfiction. Two Honor Books may be named in each category.

The winning titles must be published in the United States but they may be written or illustrated by citizens of any country. The awards are chosen by an independent panel of three judges who are annually appointed by the Editor of the Horn Book.

When Xiomara Batista, who pours all her frustrations and passion into poetry, is invited to join the school slam poetry club, she struggles with her mother's expectations and her need to be heard.

Twelve-year-old María Luisa O'Neill-Morales (who really prefers to be called Malú) reluctantly moves with her Mexican-American mother to Chicago and starts seventh grade with a bang--violating the dress code with her punk rock aesthetic and spurning the middle school's most popular girl in favor of starting a band with a group of like-minded weirdos.

Twelve-year-old Candice Miller is spending the summer in Lambert, South Carolina, in the old house that belonged to her grandmother, who died after being dismissed as city manager for having the city tennis courts dug up looking for buried treasure--but when she finds the letter that sent her grandmother on the treasure hunt, she finds herself caught up in the mystery and, with the help of her new friend and fellow book-worm, Brandon, she sets out to find the inheritance, exonerate her grandmother, and expose an injustice once committed against an African American family in Lambert.

After witnessing her friend's death at the hands of a police officer, Starr Carter's life is complicated when the police and a local drug lord try to intimidate her in an effort to learn what happened the night Kahlil died 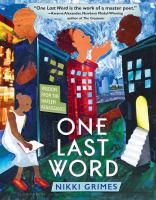 On an island off the south coast of Victorian England, fourteen-year-old Faith investigates themysterious death of her father, who was involved in a scandal, and discovers a tree that feeds upon lies and gives those who eat its fruit visions of truth.

As Bridge makes her way through seventh grade on Manhattan's Upper West Side with her best friends, curvacious Em, crusader Tab, and a curious new friend--or more than friend--Sherm, she finds the answer she has been seeking since she barely survived an accident at age eight: "What is my purpose?".

Fourteen-year-old Joan Skraggs, just like the heroines in her beloved novels, yearns for real life and true love. But what hope is there for adventure, beauty, or art on a hardscrabble farm in Pennsylvania where the work never ends? Over the summer of 1911, Joan pours her heart out into her diary as she seeks a new, better life for herself--because maybe, just maybe, a hired girl cleaning and cooking for six dollars a week can become what a farm girl could only dream of--a woman with a future.

Cartwheeling in Thunderstorms
Author: Katherine Rundell
2015 Boston Globe Horn Book -- Fiction - Winner
Even a life on the untamed plains of Africa can't prepare Wilhelmina Silver for the wilds of an English boarding school in this lovely and lyrical novel from the author of the acclaimed "Rooftoppers."
Find in InfoSoup

Rose Under Fire
Author: Elizabeth Wein
2014 Boston Globe Horn Book -- Fiction - Honor
When young American pilot Rose Justice is captured by Nazis and sent to Ravensbrück, the notorious women's concentration camp, she finds hope in the impossible through the loyalty, bravery, and friendship of her fellow prisoners.
Find in InfoSoup